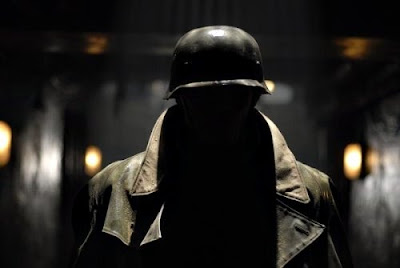 Some soldiers stumble across a spooky bunker. Bad things happen.
Okay, so Outpost isn't going to win any prizes for originality, but it's a worthy addition to the 'soldiers stumbling across a spooky bunker' horror sub-genre. What we get is a gritty, well-crafted, low-to-no budget movie that relies on intelligent directing and great lighting and make-up for its chills and thrills, not CGI or semi-naked teenagers.

There's some great acting on show. I loved Richard Brake as Prior, the only American of the bunch. We know what kind of character he's going to be from his nickname alone ('Redneck') but Brake's performance gives him some real depth - certainly more than we could expect in a film like this. And then there's Michael Smiley ('Tyres' from Spaced) 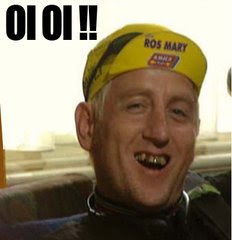 ...
...who plays McKay, a Northern Irish loudmouth with an IRA tattoo and a Para beret, who provides one of the most realistic and funniest reactions to a zombie re-animating itself in cinematic history (IMHO).

And wait 'til you see The Breather!

Outpost has its flaws though, particularly in the ending that plays loose and fast with what has gone before, resulting in a glaring plot-hole. The director openly admits as much in the commentary, but even so, it's fairly unforgivable. Speaking of the commentary, it's an enjoyable and enthusiastic chat between director and producer that reveals how imagination and some ingenuity can overcome a lack of money and special effects.
Posted by The Igloo Keeper at 16:08 2 comments