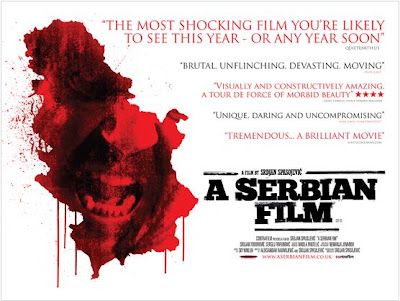 You wake up with no memory. On the TV there is a video of a burly man having rough sex with your prone body. When you go to the toilet, you find yourself pissing blood!!

Yawn - honestly, what’s the big deal? This sounds like a fairly typical Wednesday morning for me, after a Tuesday night out with Big Al from the Accounts Department at work.

It's also one of the many amusing scenes from A Serbian Film, the most shocking film ever made. I can handle watching it because I'm an experienced horror blogger but you, you've got no chance. You'll probably die of shock during the baby shagging scene.

Oh yeah, there's a baby shagging scene where a guy shags a new born baby. Not in real life though, obviously.

If you want to watch A Serbian Film, then please do. It’s a full on, unforgettable and blackly (with a capital 'B) humorous cinematic experience. But please don’t blog about it afterwards warning people against seeing it and telling us all how you wish you could wind the clock back and not have to put yourself through it – for our behalf – again. It’s not that bad. Well, it is, but still a lot less painful than watching Mona Lisa Smile for example. All this furore reminds me of the film ‘Funny People’ where a bunch of mental patients end up working in advertising and come up with some fabulous slogans. Their strap-line for the (sadly fictional) horror film ‘The Freak’ goes, “The Freak will fuck you up for the rest of your life!”.

Put it this way, if you’re shocked by the sight of a guy getting killed by an erect penis being thrust into his ocular cavity then A Serbian Film might not be for you. But if this is the case then be warned - you have no sense of fun. And you’ve obviously not been out with me on a Friday night either.

This trailer will fuck you up for the rest of your life: