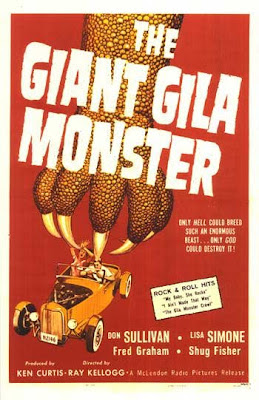 Let’s meet the hero of the piece, ‘Chase’ - a mechanic who is happy to spend a lot of time doing gratis work for the local sheriff who, in return, seems happy for Chase to go around nicking spare parts from car crashes and destroying valuable evidence. 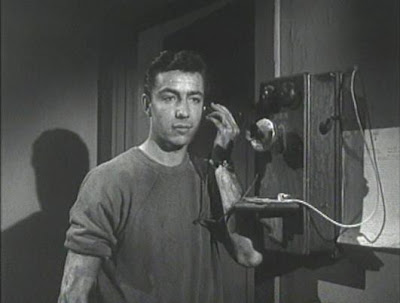 Chase’s girlfriend is a bit of an enigma - she’s either French or acting French. I hope it’s the latter, because she’s got a really bad French accent.

There’s a Giant Gila Monster on the loose (I don’t think I’m spoiling the plot for anyone by saying this am I?) and a couple of kids have gone missing. Their friends – Chase and ‘The Gang’ (mostly 35 year old teenagers) seem blissfully unconcerned about this until the Sherrif has them go out and hunt for them.

Oh, I forgot to say – before this we say Chase putting 4 jars of Nitro-glycerine into his shed. Hmmm, something tells me that won’t be the last we see of those highly explosive little objects...

So – back to (the) Chase, and on his travels he finds a very drunk driver rambling on about seeing a giant black and pink thing on the road. "Nonsense" thinks Chase and takes the drunk into his garage to cool off, only to discover when the drunk wakes up that it is none other than top K.I.L.T D.J ‘Steamroller Smith’!

This cheers Missy up so much that she apparently forgets she can’t walk and we see here in the next scene standing holding a suitcase on the way to stay over night somewhere that isn't relevant to the plot.

We eventually get to the exposition scene where the sheriff explains to Chase about the possibility of a giant lizard stalking the local populace. Unfortunately it's one of the most unconvincing exposition scenes ever: “Chase – I’ve seen a Zoologist” he says, as if he’s admitting to an affair. He goes on to explain slowly and with an obvious lack of interest that there’s probably a giant lizard roaming about. But he ends with some great advice. “But don’t worry about that” he says “you go out and enjoy yourself tonight.”

Cut to the local rock and roll barn shindig where ‘Steamroller Smith’ repays the favour and plays an impromptu set ! And the hot new mystery disc that has the kids dancing turns out to be written and performed by none other than our very own Chase! But for some reason Chase deliberately sabotages his blossoming musical career by then getting out that bloody ukelele again and – sorry about this - starts singing ” AND THE LORD SAID, LAUGH CHILDREN LAUGH! LAUGH CHILDREN LAUGH! LAUGH CHI~LDREN LAUGH, AND THE LORD SAID……” (REPEAT x 48 TIMES).

Unsurprisingly, The Giant Gila Monster has had enough and decides to attack. 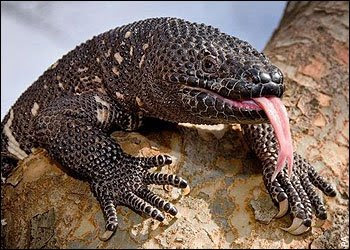 Chase remembers about the nitro-glycerine, and gives them to his 'French' girlfriend to hold safely before picking the bumpiest looking field and driving straight across it. “Keep that stuff still - do you want to blow us all up !? “ he says to her rather unfairly. We’re almost at the end now - Chase unselfishly drives his new hot-rod straight at the Giant Gila Monster and blows it to smithereens. Everbody is saved and there’s a happy ending. “Well, now that the owner of your garage has been killed I guess that there’s a job there for you!” says the sherrif with a smile – and everybody laughs!

Great film. Recommended. I'll never get that song out of my head though – ALTOGETHER NOW! "AND THE LORD SAID…" repeat to fade...